This is where the Rhône bids farewell to Lake Geneva before flowing southwards to Marseille, irrigating the Geneva hinterland as it goes on its way. This region between the Jura mountains and the Savoy Alps is marked not only by its river and lake, but also by the international city of Geneva: capital of Peace, an elegant and cosmopolitan city also known for its emblematic Jet d’Eau fountain.

If you are arriving from France, your Grand Tour of Switzerland starts when you cross the border at Saint-Julien. On your right lies Mont Salève, which is in France but the Genevans have annexed it after a fashion. You arrive via Carouge, a charming town in its own right on the edge of Geneva, near the Reformation Wall which commemorates some of the major figures of the Reformation including Jean Calvin, who marked the city’s history. It is advisable to leave your car in a covered car park near the itinerary to continue your visit of the old town. You can absorb the city’s atmosphere in the streets around the cathedral and on the Rhône Islands.

The Bains des Pâquis swimming baths offer an unusual choice of activities with not only a pool in the lake but also a steam bath, a restaurant and programme of cultural events. If you turn left a little further on you reach the Palace of Nations and the International Red Cross and Red Crescent Museum.

The road leading from Geneva to join the Grand Tour follows the built-up shoreline to Nyon and then branches off towards the Jura foothills and Saint-George, where it joins the central loop. The main points of interest by the lake include Madame de Staël’s chateau at Coppet, the former Roman city of Nyon and the Swiss National Museum at the Chateau de Prangins. 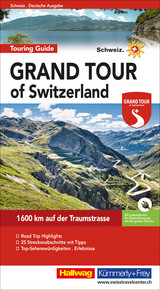 The route
From Saint-Julien-en-Genevois via Carouge to Geneva harbour. Take the main road along the shore until you reach Nyon and Gland, then continue directly to Saint-George via Begnins.
Distance: 53 kilometres
Photo opportunity: Sights as you cross the city of Geneva, the Pont du Mont-Blanc, the harbour with the Jet d’Eau and the Bains des Pâquis are worth capturing for posterity. The road which climbs up through La Côte vineyard to the Col du Marchairuz passes through some delightful scenery.