This tour guides you to the German enclave located in northern Switzerland near Schaffhausen.

The Corona crisis is a hard time for touring cyclists. The fact that you can no longer simply visit the Black Forest, the Vosges mountains and also friends and relatives beyond the country's borders is causing a lot of trouble. For cosmopolitans like myself, the idea of open borders is part of the basic equipment. But at the moment we have become a closed society, so to speak, because of the Corona crisis. It's a bit like the GDR in former times. A thought that I don't like at all. And so I had the idea for a tour tip which, despite insurmountable borders, leads completely legally across extraterritorial territory.

Into the hills of the Zürcher Weinland
Starting point of the border area tour tip is the town of Uster. To be more precise, the castle, which towers above the town as a landmark visible from afar. Uster, by the way, is the third largest town in Canton Zurich, nestled between Lake Greifensee to the east and Lake Pfäffikersee to the west. The panoramic view from the castle tower is correspondingly magnificent. But we are hot to go. So first of all we take small roads via Fehraltorf, Kemptthal and Flaach around busy Winterthur, into the beautiful Zurich Weinland. And to the magnificent double loop of the Rhine with the former Benedictine monastery Rheinau on the island in the middle of the river. There are plenty of other worthwhile stops in the immediate vicinity: The Rhine Falls and the lovely town of Schaffhausen are also only a few minutes' drive away.

Always along the barricaded national border
Detours expand your knowledge of the area: in a relaxed curve swing, you therefore start in a northern curve from Schaffhausen and continue along the national border to Thayngen and on to the barricaded green border near Ebringen (D). Soldiers and police guard the border. An uncomfortable chicken skin moment. Where is the European idea, the human in the Corona crisis? Many people on both sides of the "Corona Wall" ask themselves this question. All we have left is the U-turn. But a few kilometres further south we can hardly believe our eyes. A German place-name sign suddenly appears ...

In the Canton of Schaffhausen and yet abroadAs the surveyor would have drunk one over thirsty or the soldier Läppli got lost: But here, high up in the north, Switzerland is only a few hundred metres young, and that's where it stops. A yellow sign stands by the road, on it a black eagle, framed by the words "Federal Republic of Germany". A place like no other, a spot of Germany in the middle of Switzerland, completely surrounded by the canton of Schaffhausen: Büsingen on the Hochrhein, the only exclave of Germany in Switzerland. On the map, the village is no more than a tiny dot. It lies there lost, almost as if the distant Berlin had forgotten it. Such a part of another state enclosed by Switzerland is, by the way, there is a second time - in the very south: Campione d'Italia belongs to Italy, but is completely surrounded by the canton of Ticino. In both enclaves, the Swiss franc is the main currency, and both have two different postcodes and telephone booths. But back to the tour tip: behind Diessenhofen, the Corona border experiences come to an end: Green countryside, scattered farmhouses and small villages dominate the landscape on the way past Frauenfeld, into the Zurich Oberland and thus to the driving highlight - the "mountain stretch" of the route. The Girenbadstrasse winds through meadows and woods from Oberschlatt and climbs steadily up to 740 metres above sea level. Just below the "pass summit" (after the shutdown) the time-honoured Gasthof Gyrenbad lures you with a pit stop. And at the end of the tour, after 205 kilometres, the refreshing bath in the Greifensee. 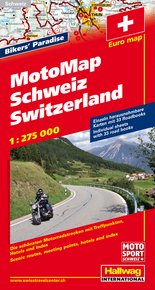 The Gempen to the athletes
Shortly after the Pony Ranch we turn left to Hochwald alias Hobel on the Gempen plateau. Now at the latest the knee grinder fraction gets going! From Hochwald we go down through the rocks to Dornach, where we take the popular curve road up to Gempen. In the village of Gempen we turn left to the Gempen Tower, from where we have a good view to the Black Forest, the Grand Ballon in Alsace, but also to the Swiss Alps! The vantage point is accordingly heavily frequented - we are in the middle of the Basel recreation area. From here we take the narrow mountain road between the cherry trees down to the Birstal, past the Dorneck castle ruins into the magnificent village centre of Oberdornach. After an ice break we take the last kilometres to Münchenstein, turn off to Muttenz, where we drive straight to the Pantheon and after the discovery trip through the Baselbiet we start our journey into the history of Swiss electric mobility.

The history of the Accumobile
Muttenz - The guest exhibition of electric vehicles from the national transport collection at the Swiss Museum of Transport in the Pantheon gives for the first time an overview of the unexpectedly long history of the so-called "Accumobile". The collection of technical history focuses on the national relationship to road traffic.
Info: www.pantheonbasel.ch