in the land of the national hero

With magnifying glass, umbrella and crossbow on Tell's tracks
The game for future detectives and their families brings the national hero Wilhelm Tell closer with modern staging technology, outdoors in the Uri contryside. A murder has happened. A man was shot dead in the Hohlen Gasse near Küssnacht. The arrow of a crossbolts hit him right in the heart.

The players investigate as commissioner in the case around the murdered bailiff. Equipped with a game plan, crime scene cards, commissioner's identity card and commissioner's backpack, they set off on the trail of the unerring shooter. Over 15 stations, the Wilhelm Tell file is revealed to them step by step. Experiment after experiment the case is solved and multimedia stagings demand their senses at the crime scenes. The detectives always have their research objects from the commissioner's backpack at hand, which help them to uncover the secret.

So they take the post bus to the crime scene Bürglen, the birthplace of Tell, where it all began. This was a brutal place, according to the police report (the map from the rucksack). You are asked to look for traces on the cobblestones, with a magnifying glass of course! On the Old Klausen Trail in the direction of Altdorf you have to solve the most exciting and technically complex riddle. It is rainy weather, says the police inventory. With umbrella it goes thus under the shower at the house wall - more is not betrayed here.

A registration is not necessary. Simply go to the Tourist Information in Altdorf during the opening hours, receive the equipment and solve the case. 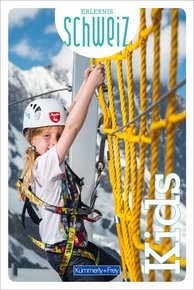 Arrival:
By train to Altdorf and by bus to the stop Altdof, Tell monument.

Another tip:
Gottardo railway hiking trail, 32 kilometres from Göschenen to Altdorf, with information boards on the history of the Gotthard mountain route.