From Disentis Monastery to the episcopal city of Chur

The Rhine route through the Surselva, the valley of the upper Rhine
In Disentis, a look back at the oldest existing Benedictine monastery north of the Alps - and then it's down to the upper Rhine. Soon the mountain valley begins to open up: the Surselva. The pretty villages with their beautiful fountains are delightful. If you are lucky, you can even enjoy a morning "Ave Maria", played on the church organ in the middle of a small village.

Despite the constant ups and downs, the bike ride in this beautiful and quiet nature is a lot of fun. The Rhine gurgles, the Rhaetian Railway leisurely travels through a magnificent landscape.

Shortly after Ilanz you reach the historic Valendas. In the middle of the village stands the largest wooden fountain in Europe, built in 1760. Truly a Bijou - one would all too much like to venture into the cool basin on hot summer days ...

It's going to be spectacular down on the Rhine, in the Ruinaulta. Between Ilanz and Reichenau is perhaps the most impressive gorge in the country - not without reason called the "Grand Canyon of Switzerland". Bizarre rock formations up to 400 metres high create a mystical atmosphere with the appropriate incidence of light. After the retreat of the Ice Age glaciers, ten cubic kilometres of rock fell into the valley and dammed the Rhine near Flims. Since then, the river has made its way here again. The cycle route follows the small rhinestones slightly uphill on the right side of the valley via Versam to Bonaduz and Reichenau, where you cross over to the castle at the confluence of the Vorderrhein and Hinterrhein rivers.

Arrived in Chur, the city with the highest restaurant density, the impressive pictures of the gorge can certainly be digested well. 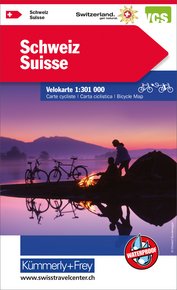 Arrival:
Disentis can be reached by train via Chur or Erstfeld/Andermatt/Oberalppas.

Another tip:
Hiking excursion to Lake Tomasee, the source of the Rhine; the small mountain stream flows 1320 kilometres later as a mighty stream into the North Sea.