Alaska features one of the last large wilderness areas in the world. Here the highest peaks of North America rise up, mighty glaciers plunge into the sea and you will find a vast extense of tundra. Where else can you find such unspoilt nature and spectacular wildlife? Brown bears fish for salmon, caribou and wolves roam the tundra and whales, sea otters and seals cavort in the coastal waters.

"The Last Frontier" is written on the license plates of cars in Alaska. In fact, America's 49th state is the last frontier to wilderness - a country that has a touch of adventure and freedom as well as untouched nature.

If you are flying to Alaska for the first time, start your adventure in Anchorage, Alaska's largest metropolis with 300,000 inhabitants and ideally located for discovering Central Alaska. In order to experience nature even more intensively, I recommend a mobile vehicle with sleeping facilities. With an all-wheel-drive pick-up camper you are well equipped, but a conventional motorhome does the same, most of the main traffic routes are now asphalted.

As soon as you leave the city, you are surrounded by magnificent nature. In only four hours drive north of the metropolis the Denali National Park waits and with it the highest mountain of North America. 6190 meters the snow and ice covered Denali majestically rises from the surrounding tundra. Secure a campsite in the heart of the park a few months in advance. A shuttle bus will take you further into the National Park. With a bit of luck you may spot moose, falcons, wolves, caribou and maybe even a grizzly bear. And if you are very lucky, after a 6-hour bus ride you will stand in front of the face of Denali, which is reflected in Wonder Lake and unfortunately only rarely shows up, as it is usually covered by a thick cloud cover. In the evening you can end the day at the campfire with a hearty beer or a glass of wine.

If you're looking for more adventure, you can rent a canoe in Fairbanks and paddle down the Tanana or Chena rivers, dig for gold and visit a nostalgic gold digger that washed out 7.5 million gold ounces between 1928 and 1959. Or drive to Chena Hot Springs and treat yourself to geothermal water after a strenuous paddle.

On the Kenai Peninsula south of Anchorage, one highlight follows the other. Already the journey along the Turnagain Fjord and over the pass of the same name promises a breathtaking scenery and lets you get out again and again to photograph the landscape. In Seward, everything revolves around the sea and its wildlife. In the sea aquarium you will get a first impression of what awaits you on a trip out to the open sea. Blue whales, humpback whales and orcas cavort in the water rich in fish, seals sunbathe on the cliffs off the coast, and after a day trip past calving glaciers back to the harbour, where sea otters grab the salmon leftovers that the fishermen were unable to use on their high-yield catch.

On the Sterling Highway you reach Homer after a day trip. Make sure you stop at Ninilchik and Anchor Point first. In the 800-soul village there is a Russian Orthodox church - built in 1901 - and reminds of past times and that Alaska once belonged to Russia. Further south, Anchor River State Park is an idyllic campsite by the sea. Here you can get surprisingly close to the majestic bald eagles and watch them fishing.

Once you arrive in Homer, it is worth securing an overnight stay on the headland. In addition to a nice harbour and various restaurants, you can also find some souvenirs and from here you can organize a tour to the bears in Katmai National Park.

The next morning we will go by small plane to the realm of the bears. After an hour-long flight past glaciers and mountains, the plane lands in "Hallo Bay" on the beach. In the sand you discover first bear tracks and soon the first bear can be seen. The furry predators are used to humans and so you get amazingly close to the Grizzly on the hike through the Delta without having to get scared. A somewhat expensive, but unique and unforgettable excursion that is definitely worth it.

Back in Homer, make sure you stop off at the Salty Dawg Saloon, wallpapered with all kinds of banknotes, taste the local beer and tell the locals about your adventure. 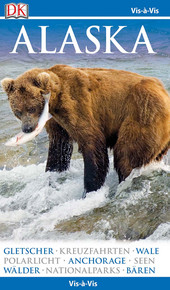 How you get there:
Nonstop with Condor from Frankfurt

How long should I go:
At least 3 weeks

Best travel time:
May to September