Stockholm - Venice of the North

The impressively located Swedish capital spreads over 14 islands and is rightly called the "Venice of the North". Stockholm is not only the seat of parliament and government, but also the financial and economic centre of Sweden. Stroll through the old town of Gamla Stan, visit the Royal Castle with its Changing of the Guard, dance in the ABBA Museum and get up close to moose in the Skansen Open Air Museum.

Maybe you're on a cruise ship, on business or on a sightseeing tour and you only have one day in Stockholm. No problem - start your perfect day in the historic old town on Stadsholmen island. The Gamla Stan district, probably the most popular among visitors, is definitely not to be missed. Through winding alleys the way leads past earth-coloured houses with nice little shops, restaurants and cafés. Especially in summer it can get quite crowded here. Beside the most beautiful place for me personally, Stortorget, the market place of Stockholm, you should visit the two churches Storkyrkan and Tyske Kerk. In 2010, Crown Princess Victoria and Daniel Westling were married in the Storkyrkan, Stockholm Cathedral. The Tyska Kyrkan, the German Church, is in turn dedicated to St. Gertrude and has
96 meters the highest church tower of the whole city. The façade of the "Kungliga slottet" looks ostentatious but not particularly decorative. The Royal Palace is the residence and workplace of the Swedish Royal Family. Maybe someone is looking out the window right now! If you are not on a state visit, you can also visit the castle. Inside there are several museums with royal garments, carriages, carriages and armour. My tip: Don't miss the midday parade with changing of the guard, which takes place at noon.
Right behind the Royal Palace there is the small island Helgeandsholmen with the parliament building from which the country is governed. Through the gate you enter the modern district Norrmalm with the pedestrian zone Drottningsgatan, where the department stores and shops are located. Here you can shop as you please.

The ferry takes you to the island of Djurgarden in a short time, where many attractions are waiting for you. With their song Waterloo, they took the Eurovision Song Contest by storm in 1974 and with it the hearts of many Europeans. Agnetha, Björn, Benny and Anni-Frid have been an integral part of pop music ever since. On the island of Djurgården they even had their own museum dedicated to them in 2013. The permanent exhibition shows stage clothes, records, props, concert photos and the current events of the time in sound and vision. ABBA itself is represented by lifelike silicone figures, and you can even sing and dance with the band on stage. Just around the corner another museum is waiting to be discovered by you: The Swedish galleon Vasa sank on its maiden voyage in 1628 after only a few meters. The thick mud preserved the warship so perfectly that it was salvaged and restored in 1961 in good condition. Today you can admire the ship in all its splendour in the Vasa Museum.
On the same peninsula is also the Skansen open-air museum with about 140 buildings that have been gathered from all over Sweden. You can visit old farms, windmills, a church and the houses of the Sami, the indigenous people in the far north. There is also an animal park, which introduces you to Scandinavian animals such as elk, reindeer, lynx and bison. Old breeds of domestic animals are also bred.

As Stockholm is located on several islands surrounded by water, I would like to warmly recommend a boat trip. Either you take a conventional ferry and head towards Vaxholm, or you join a guided boat tour, for example Royal Canal, which runs on the Djurgården Canal around the beautiful garden island. On this leisurely boat tour you can spare your tired feet and at the same time enjoy the view of the islands and the panorama of the city.

In the evening you should take a look at the Swedish capital from an elevated viewpoint. The district Södermalm, opposite Gamla Stan, offers several beautiful viewpoints. The Monteliusvägen is not yet so well known to tourists. Here, the view at sundown reaches far beyond Riddarfjärden and Mälaren with the city hall of Stockholm.
A little adventure for those who do not suffer from vertigo are the two glass gondolas that are lifted up to the roof at the outside of the Ericsson Globe (Globen Arena). The multi-purpose arena built in 1989 is a feast for the eyes in itself - but the view of Stockholm from the highest point is simply magnificent.
Or you can combine the view with an aperitif or dinner in the Mosebacke beer garden. High above Stockholm the view goes over Gamla Stan, Skeppsholmen to the garden island Djurgarden. Especially in the summer, you can enjoy a delicious meal and a cool Swedish beer on the viewing terrace. Live concerts are often organised. 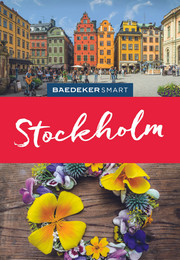 That'll get you there:
nonstop with SWISS

How long am I supposed to go:
2 - 3 days - can be combined well with a round trip of Sweden