Bergen - Queen of the Norwegian fjords

Bergen is considered the most beautiful city in the fjord country of Norway, if not the whole kingdom. This captivating city features the historic Hanseatic quarter "Bryggen", the Fløyen lookout and the fish market. You can attend a concert in the former home of composer Edvard Grieg or enjoy the "Norway in a nutshell" day tour. Immerse yourself in 1,000 years of history and spend your perfect day in the Hanseatic city.

Whether you have booked Bergen as a city trip, visit it as a motorhome traveller or choose it as the starting point of your Hurtigruten trip, the Hanseatic city is considered a true jewel of the North by both the 280,000 locals and the vast majority of tourists. The town, which was founded as early as 1070 AD, owes much of its charm to its location on the inner bay of the Byfjord, surrounded by seven hills. When it is not raining - Bergen is often called the capital of rain - the cosmopolitan city shows its best side. This city wants to be discovered - come with us on a perfect day in Bergen!

After a delicious Norwegian breakfast we start the day centrally at the market place. The torget is situated at the front of the harbour basin Vågen, where sailing and motor yachts gently rock back and forth next to pleasure boats and small cutters. There is a lively life here, not only because of the fruit, vegetable and fish market every morning. Just a stone's throw away is Bergen's flagship: the Hanseatic quarter "Bryggen", a UNESCO World Heritage Site, with its narrow streets and colourful little houses, invites you to stroll, discover and take pictures. Here you are sure to find a nice souvenir - a small troll, Bryggen as Advent light or even a reindeer skin. If you are interested in Bergen's history, be sure to visit the Bryggenmuseum below St. Mary's Church, which is also worth a visit; it is Bergen's oldest building and one of the best preserved Romanesque churches in Norway.

Bergen from the inside is one thing, Bergen from above is another - more on that later - and you have to see Bergen from the outside, from the water. With the small barque M/F Vågen you can go from the torget to the akvariet. With its 50 tanks, the largest saltwater aquarium in Europe is definitely worth a visit. Besides seal, penguin and sea lion shows, I personally find the attached cinema with nature films worth seeing a successful change to the aquariums.

You can get back to the city centre on a 20-minute walk along the river promenade. To get an overview of the city and see it from above, you can take the cable car up the 320m high Fløyen mountain in a few minutes. The view is fabulous and up here one realizes how ideally this dreamlike city nestles against the seven surrounding hills. Stop for lunch at Fløien Folkerestaurant. While enjoying your lunch, you can continue to admire the panorama from the terrace.

To get back to the city, a nice walk downhill through the forest and the villa district is a good idea. After three quarters of an hour you have reached sea level again. Passing the two 900-year-old churches, the Kreuzkirche and the cathedral, you will reach the three-winged complex "Danckert Krohns Stiftelse", one of the most beautiful wooden buildings in Bergen. Directly opposite is the Leprosy Museum, which is worth seeing and is dedicated to Professor Hansen, the Norwegian discoverer of the pathogen leprosy bacillus.

The fact that Bergen was named European City of Culture in 2000 is partly due to the Bergen Art Museum, which consists of four unique collections that are situated on Rasmus Meyers allé by the central city lake Lille Lungegårdsvann.

After so many sightseeings, one can either continue on the way back to the hotel with a little shopping tour, for example through the pedestrian zone Torghalmenningen. Or - provided you still like it - you can visit two other highlights south of the city, which can be reached quickly by train. The first destination is Fantoft Stave Church, which was built around 1150 on the Sognefjord and moved to Bergen in 1883. After a fire a good 20 years ago, the stave church is now shining in its old beauty again. Nearby is the second highlight, Edward Grieg's former residence Troldhaugen. Among other things, the villa houses the artist's Steinway grand piano, which is still used today for concerts that are held between June and August at noon and in the evenings including a guided tour.

Where to go for dinner? If you like fish, you should definitely try the oldest fish restaurant in Bergen in Enjørningen in Bryggen. If you prefer something more rustic, the two-storey Bryggeloft is nearby. Here you will find home-style Norwegian cuisine with free views of the harbour basin.
On summer evenings - as is well known, the sun doesn't set before 11 pm in July - the nightlife takes place directly at the Torget and in the surrounding alleys, where dozens of street cafés and pubs invite you to party. If you like it cool and loud, go to the rock cellar "Garage" or the "Café Opera". Classical music can be heard in the "Grieghallen". The "Altona vinbar" is a cosy place to round off the evening. Norway's largest wine bar offers around 30 types of champagne, over 120 different wines and a wide selection of whiskies, grappas and cognacs.

From Bergen you can also experience the 12-hour unguided day tour "Norway in a Nutshell": The Bergen Railway takes you up to Hardangervidda at over 800 metres above sea level. With the Flåm Railway, which is one of the steepest railway lines in the world and is hard to beat in terms of panorama, you chug past impressive waterfalls to Flåm. The tour continues by ferry through the narrow Næroyfjord to Gudvangen. From here you take the bus and 13 hairpin bends over the Stalheimskleiva Pass to Voss and from here you return by train to Bergen. Be sure to plan ahead! 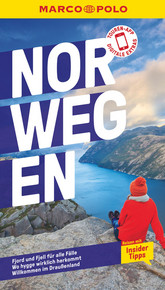 How you get there:
by motorhome or by airplane/train via Oslo

How long should I go:
min. 2 days, combined with Norway trip

More information about the region:
https://de.visitbergen.com/