There are historical water pipes to the left and right of the Rhone to Martigny, in the Valais they are called Suonen or Bisses. In the sun-drenched canton they still bring water from the mountain valleys along the steep slopes to the dry meadows and vineyards above the Rhone valley. In Ayent (near Anzère) there is the pretty Musée des Bisses, worth a visit.

The way from the Lac de Tseuzier (in the valley of the Rawilpass) to Crans-Montana is varied, but actually not strenuous. For the hiker, there are grandiose deep views from the former water channel down into the deeply incised valley. As one does not return to the same place, the access to the Tseuzier dam by post bus from Sion is recommended. Then the path first leads for an hour and a half from the reservoir (with restaurant) comfortably on alpine paths to Alp Er de Chermignon. This is where the daring bisse towards Crans-Montana began.

The cliffs above the Bisse are steep, and it becomes clear how much effort the constant maintenance used to mean. A little further ahead, rock faces follow vertically down from the former watercourse - railings, steel cables and wooden footbridges now make it possible to walk along the exciting path in the Liène valley. However, sure-footedness and good footwear are a prerequisite. Information boards on the side of the path provide information about the local conditions. The trail along the historic Bisse du Ro, which ends above Crans-sur-Sierre, is usually not open until mid-June. 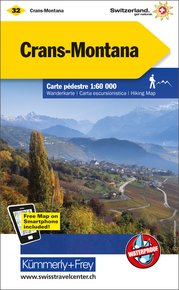 Arrival:
Post bus from the Rhone Valley via Ayent to the Barrage de Tseuzier. Return journey from Crans-sur-Sierre.

Another tip:
Bisse du Tsittoret and visit to the Alpine Museum in the hamlet of Colombire (Montana).