Round trip to Riegelhäuser, Rhine Falls and the Rheinau monastery

Between Schaffhausen and Winterthur there are many possibilities for larger and smaller round tours by bike. Stage 7 of the SwitzerlandMobility "Rhine Route", the regional cycle route "Rhine Falls - Zurich Oberland", the "Thur Route" and the "Eastern Switzerland Wine Route" pass through areas attractive to cyclists.

Finally, the "Great Wine Route" curves through various landscapes of the Zurich Weinlandess, but also to the attractions on the Rhine. For orientation, the cycle map Winterthur-Schaffhausen by Kümmerly+Frey is recommended, as the tour is not continuously signposted. The suggested starting point is Andelfingen, then over the old Thur bridge, following the river on small roads and on to Ossingen. Here the small tour is worthwhile to marvel at the magnificent timber-framed buildings. On other wine country routes, too, the half-timbered construction with its bordeaux-red painted beams is a constant highlight. The houses are actually a post and beam construction with much more subdivision of the compartments by sloping struts and short, horizontal bars. This can be observed particularly well in the village of Marthalen.

Back to the round tour: It continues to Oberneunform and Waltalingen. Here we enjoy the view of the Stammertal with the vineyards at the foot of the Stammerberg. Here too, lovers of old timber-framed houses take an additional round through Ober- and Unterstammheim. Via Truttikon, Trüllikon, Benken and Uhwiesen we reach Schloss Laufen at the Rhine Falls.

Those who have had enough of the thunderous masses of water will ride southwards on the above-mentioned Veloland Route No. 2 (Rhine Route) and reach the next highlight: the monastery island of Rheinau, where the former Benedictine monastery is enthroned. A leisurely ride then continues along the Rhine to Ellikon and into the Flaachtal. Via the village of Dorf with its vineyards we reach the starting point of Andelfingen. 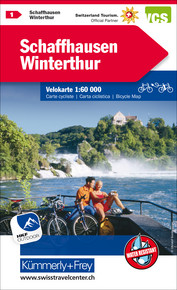 Arrival:
Andelfingen is on the S12 and S24 S-Bahn lines from Zurich HB in the direction of Schaffhausen.