On the way with the mountain bike classic in Ticino
SwitzerlandMobility features four stages around Lugano "Lugano Bike", in the first part on the heights of Val Colla, in the second part over Monte Tamaro and below the ridge into Malcantone to Ponte Tresa.

The first part consists of two stages in the varied Val Colla, there are overnight accommodations especially for bikers. Actually, you could also drive up to Monte Brè via Lugano on your own. But with the funicular (from Suvigliana) one saves exactly those forces that are needed later on the way to Capanna Pairolo. First it's on a liquid high-level trail and later on a fun descent into the hinterland of Lugano.

The ascent to Capanna Pairolo begins at Sonvico. Halfway the way becomes steeper, the curves more numerous, and finally 800 meters of altitude difference are laped up to the hut - for us this is exactly the right place for a stage stop. The spartan Capanna offers a beautiful view over the hinterland of Lugano, but above all a lot of cosiness and first-class food.

The next day follows the enjoyable high trail at Monte Bar, one of the great mountain bike classics in Ticino. The route continues along the ridge from Pairolo to Gola di Lago, alternating between single trails and unpaved roads. The best view is from the Monte Bar hut, where a detour on foot to the Monte Bar summit is recommended. The treeless, round mountain offers a panoramic view that is second to none. This is particularly beautiful when there is a north wind - then the snow-covered Valais and Bernese Alps seem to be close enough to touch. 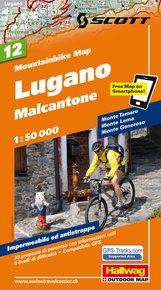 Arrival:
From Lugano to the funicular Monte Brè; Attention, this transports mountain bikes only from the intermediate station Suvigliana.

Another tip:
The rock teeth of the old (Denti della Vecchia) are the landmark of the Val Colla behind Lugano.